Censored - Kissing or C U Next Tuesday?

Yesterday was an interesting day = coffee morning @ Shatti Cinemas for a Ladies movie outing. I went to the last one alone and it was fun for me-myself-and I, the movie being The Ugly Truth...a true chick flick which was predictable but I enjoyed it nonetheless. So this time around I anticipated it would be much the same and gathered a gang (four is considered a gang) of fab ladies to partake in the shenanigans with me.

And shenanigans it was! We get there and pay for our tickets then proceed to the Dunkin' Donuts stand to grab our free donut and coffee. Now, 'J' (no, I'm not speaking in the 3rd person y'all!) don't do coffee so I suggest that she might be able to get a tea instead since it was written on the menu...but the Dunkin' Donuts girl said it was only coffee - like the heart stopping, artery clogging, feel like you haven't brushed your teeth in 3 days kinda strong filtered coffee. No problem, I will just go and ask the ticket lady if we can get 'J' a water or something. And it went pair-shaped from there.

Me: My friend doesn't drink coffee, do you have tea/juice/water she could have instead?
Ticket Lady: No, its a ladies coffee morning ma'am *head wobble*
Me: I appreciate that, but she doesn't drink it and although it is a coffee morning surely you offer something else to the masses that don't drink coffee?
Ticket Lady (getting more agitated as time goes by): No, we don't! The email invitation explicitly stated that it was a coffee morning, but we will take your request on board for the future coffee mornings *smile*
Me: Well coffee shops here don't just sell coffee...they sell juice/tea/water, but their title is a coffee shop.
Ticket Lady: Well, she can certainly buy a water if thats what she wants? *head wobble*

So I go and tell 'J' that she is welcome to purchase a water and she does so, only to have the concession stand guy tell her he isn't working...and then ticket lady says something in Hindi aka tells him to serve her...aye aye aye it was a mess I tell you...can someone please just get my friend something to drink already? And eventually concession stand guy comes through and 'J' is no longer parched, yet her wallet is a little lighter and we are all truly annoyed. 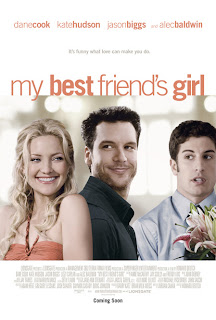 So, on to the movie. We are all in the mood for a good (or bad) chick flick and given Kate Hudson and Jason Biggs are in the cast, I anticipate it will be a typical Rom-Com with some sarcasm and stupid stupid laughs. Think American Pie meets Bride Wars right? Well, that it was BUT Dane Cook took the cake saying the 'cu#t'* word less than 1.5 minutes into the movie...which truly set the tone for the rest of the movie and endless shrieks of horror from the nanna's in the rows behind us. While we giggled with nervousness and surprise, many a sophisticated lady was taken a back by the constant swearing, vulgar language and singing of "pop that pussy" throughout the movie. Just what you expect from a wholesome coffee/movie morning no? SURPRISE!

* Note for the day - Today's modern western youth often replace this word with the acronym - C U Next Tuesday ;) And for the record, I hate that word too!

Now I'm not posting this to offend anyone (oops, shoulda done a disclaimer at the beginning!) but it begs the question - why in Oman, do they need to cut the kissing scenes out of movies (New Moon would have been better with a kiss or five - which the rest of the world were able to witness), when repetitive swearing/reference to genitalia/sexual actions are all kosher? It makes me wonder who the censor is for the Oman Movie Association or like organisation.

Definition (as taken from the ever faithful dictionary.com)
cen·sor (sěn'sər)
n.
A person authorized to examine books, films, or other material and to remove or suppress what is considered morally, politically, or otherwise objectionable.

Hmmm, a kiss is more objectionable than saying C U Next Tuesday? *shrugs shoulders with raised eyebrows*. It seems you can 'talk' about sex til the cows come home, just not do anything physical whatsoever.

Needless to say, the ladies in the washroom after the movie were NOT impressed and I think they may have had to recover by spending the afternoon talking about it amongst their bridge group or croquet club over Devonshire tea, scones and cucumber sandwiches. And whilst I wasn't the least bit offended, I did write an email to the Cinema with my feedback and asked why they chose that particular movie to show to a ladies group which was open to all nationalities and ages?

OHHHHH and I forgot to mention, as we were leaving the movies a couple of ladies wanted to have a smoke so we stopped and chatted. Ticket Lady gets into her pretty red car and starts to drive away, crunching over the kerb as she goes and as graciously as an elephant falling, scrapes her car and tires for a few seconds. She proceeds to drive a few metres and then stops in mid traffic to get out and survey the damage, stops to look back at us with sheer embarrassment and then drives off. Oops!
Posted by Delirious in the Desert at 10:47 PM